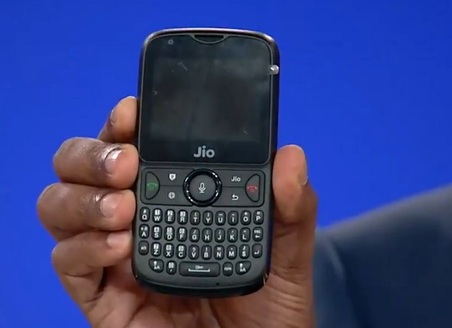 Reliance JIO, who has already made the tough path to other telecom companies to stay in the telecom market in India, introduced some of the new products like JIO Phone 2, GigaRouter, GigaTV Setup Box and Jio Giga fibre during the Annual General Meeting (AGM) 2018 at Mumbai. The second version of JIO Phone come into more focus now cause it will get app support like Facebook, Whatsapp and Youtube. The selling of the phone will start from 15 August 2018. The user has to pay Rs. 2,999 to be the owner of it.

Along with it, the company also introduced JIO Monsoon offer under which existing customer can replace this phone for newly launched version two variant at an exchange price of Rs. 501. At first sight, the phone appears like old blackberry series phone. It gets a QWERTY keypad with the four-way navigation pad. The screen size 2.4-inch QVGA display is a little bit bigger in comparison to the first version of JIO phone. In term of the camera, 2-megapixel camera at the rear and a 0.3-megapixel (VGA) camera up front, repeated with this model.

This second version of JIO phone supports dual SIM. It is packed with 512 MB RAM, 4 GB of internal storage which can be expanded up to 128 GB using microSD card and a 2,000 mAh battery. It supports VoLTE, voWiFi, FM radio, Bluetooth, Wi-Fi, GPS and NFC. It runs on Kai OS.

The first version phone was available with price tag Rs. 1500 which was refundable after three years. But for this phone, you have to pay the double amount. No refund policy is announced yet. The positive point is that now it supports social media platform. There is more than 25 Million user base of Reliance JIO. Such a large subscriber base, so app makers, who can’t keep away themselves from JIO, now shown their interest to the JIO device. As a result, social media app are on JIO Phone 2.