By Jitendra Indave in: Android OPPO On Saturday, August 04, 2018 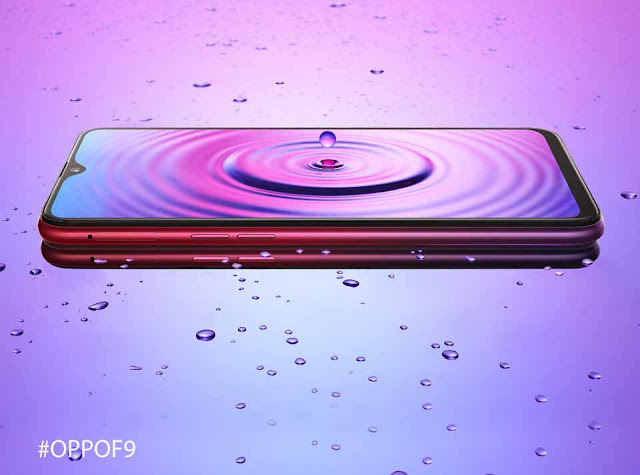 A few days ago, Oppo launched its handset F7 but due to some shortcomings, the market did not go much further. Today there is a dual camera, fast charging available in phones ranging from 5000 to 20000, but there was a lack of the dual camera in this variant of Oppo F7. To overcome these shortcomings, Oppo is going to launch the new handset Oppo F9 Pro soon. The company has launched an official teaser which states that it will be launched soon. Some specifications have been leaked about this handset on the Internet. First of all, the launch date of this phone is being told that this phone can be launched in India by August 28. The design of this new handset is very similar to Oppo F7. The company has confirmed one of the color variant "Sunrise Red". The phone will have a "unique Waterdrop screen".
A small notch will be seen in the front side display, which has been reduced significantly in this device. The phone looks quite attractive. On the back side of this phone, you will find the dual camera which was not found in its previous version OPPO F7 with a fingerprint sensor below it. In this phone, the user will get 633 inches HD Plus display. In term of the camera, the user will get the dual rear camera (f/1.8). Due to a (f/1.8), you will also get good image quality in low light condition. The front camera will be 25 megapixels (f2.0).
Here we are just getting to see the difference in the camera. Everything else is exactly the same as it was found in Oppo F7. Octa core (2 GHz, Quad core, Cortex A73 + 2 GHz, Quad core, Cortex A53) processor paired with 6 GB of RAM. Talk about storage, you will get 64 GB and 128 GB options. The battery capacity of the phone is 3400 mAh. This phone runs on Colour OS based on Android 8.1 (Oreo) which is a UI developed by Oppo. The fast charging technology which was used in Oppo Find X, the same technology will be available in this phone. As the company claims through teaser – “5-minute charge 2-hour talk” can be added an advanced feature of this phone. The phone will be fully charged almost in an hour. Overall, Oppo is in the process of launching a bangable phone that could attract Indian customers. The expected price is Rs.29990 (Base variant). Hope this time you will get value for money product from the Oppo.