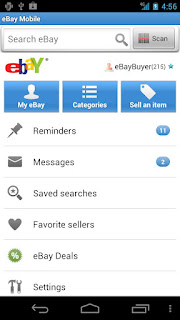 It's rare that a company decides to release its own widget set, especially this late in an app's life, but eBay has bucked the trend and produced a set of handy widgets aimed at those who've already got the eBay app installed that lets users keep track of a variety of auction-related information at a glance.
The widgets are a little unwieldy, and if you want all three of them on display, you'll have to spread them out across multiple screens.

The widgets do what they set out to, although you'll probably find yourself deleting the deals one because of the sheer amount of screen space it takes up. The other two, which keep track of reminders and give you quick access to your account, works perfectly well, but all they're doing is shortening an action by no more than a couple of taps. This is really free good one to give it try