Foldable And Multiple Display of Smartphone Are Not Dream Now: Report 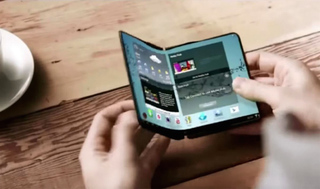 The South Korean Electronics company Samsung working on three display handset. Recently Samsung had applied for the patent of this work. According to the report of “Let’s Go Digital” Samsung has patented four models, among of these one model will have three display. This patent was approved by the World Intellectual Property Organisation on 5th July 2018. This model will have the rear and side screen.

Among these model, three of them come with a thin metal bezel on the sides, housing the antenna and a fourth one has a display that will cover all the sides. It's not been clear yet what is the motto of this display to serve but reports clarify that it will be smaller and flexible with an optically transparent layer and can thus be placed along the side of the mobile.

The front and the rear display will be working at the same time. For e.g., if you are using internet on front screen at the same time you can play the game on the rear screen. The single app can be run on both screens.

Foldable smartphone are not dream now. As per rumour reaching to ears, the Samsung Galaxy X can be the mythical foldable smartphone. As per the statement of Phonearena the screen may change its size 4.5” to 7.3” when unfolded. Even the battery will be flexible. What actual size of it, is not clear yet. Romours says it can be 3,000 mAh to 6,000 mAh. Currently, three companies are working on this kind of tech gadget. These include Samsung, LG, and Motorola. At the end of 2017, LG Electronics already applied for the patent of this kind of feature.

Samsung will begin a pilot production line for the foldable OLED display in South Korea, this summer. After rectifying the issues under the pilot project, the company will start the mass-production of the foldable OLED panels by the end of this year.
Another romour indicates that it can be launched in the at MWC 2019