Sharing Image Can Disclose Your Personal Information On The Web

By Jitendra Indave in: EXIF Image On Saturday, September 08, 2018 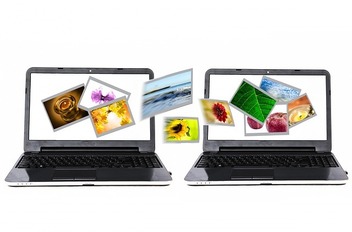 Almost all the age groups of people are on the social media platform. It has become like a daily cup of tea. At least once the user wants to access it throughout the day. The apps like Snapchat, Facebook, WhatsApp, Share chat, Instagram etc are the first choice among the user. There is a certain kind of peoples too who don’t want to get revealed. They don’t want to share their personal information. For that uses the proxy, VPN or any similar type of service. But do you know your location is disclosed when you share photo over the internet? Yes, most of the time the picture taken by your smartphone shared in EXIF format. As per the definition is given in the Wikipedia – “Exchangeable image file format is a standard that specifies the formats for images, sound, and ancillary tags used by digital cameras, scanners and other systems handling image and sound files recorded by digital cameras.”. It stores detail of latitude and longitude coordinates for the location where the photo was taken, ISO speed, shutter speed, focal length, aperture, white balance, and lens type including data and time.

The picture shared on facebook, twitter, Instagram etc removes the metadata from the image but not all the companies do it. If you share the image through Gmail or any other service, easily your house address can be revealed.

How to check what metadata is linked with an image

Click the “Details” tab at the top of the “Properties” dialogue box.

The information showing under “Details” is the metadata that will pass along with your photo when you save it, email it, or post it online. 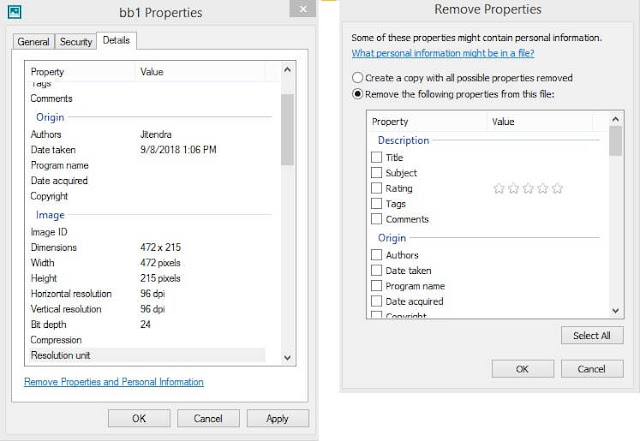 Steps to remove metadata linked to the image

Follow all the steps as said in the above paragraph. At the bottom of detail tab, there is option “Remove Properties and Personal Information”.

Click it. Another dialogue box “Remove properties” will appear.

Select the second radio button – “Remove the following properties from this line”.

Choose those attribute which you want to remove from the image file. Click the ok button.

You can do it on your android phone too.

If you want to see EXIF data of any picture in the Android, install Google Photo app.

Open an image in that app. Tap the “i” sign. This will show you EXIF data for that image.

This will remove meta content attached to that image file. Few more software is available those can be used to erase EXIF data from image file which you want to share over the internet.

iPhone user can get the help of the app like Meta data remover, photo investigator and imageoptim those are available on App Store for iOS devices.