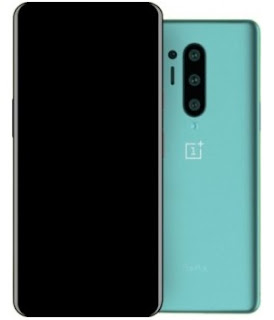 As the news coming out from the various sources that new OnePlus flagships will debut on April 15. OnePlus 8 Pro already see in the photo.The OnePlus 8 Pro smartphone, seen today in the hands of famous hollywood actor Robert Downey Jr., is reported to be released April 15th.This is in good agreement with previous data that the new product will debut in the second week of April.In addition to the older model, we can say that OnePlus 8 and even OnePlus 8 Lite,and the latter remains a dark horse for now.What various sources indicates, it will be based on the MediaTek platform, which is unlikely to please fans of OnePlus As for the OnePlus 8 Pro, it is credited with a 120-hertz display with a diagonal of 6.65, SoC Snapdragon 865 and a battery with a capacity of 4500 mAh with support for 30-watt charging.

Also, Smartphone OnePlus 8 Pro appeared in a protective case.At the disposal of network sources was the image of a powerful OnePlus 8 Pro smartphone in a protective case.The render reveals the main design features of the named device.According to available information, the announcement of the OnePlus 8 Pro will take place in the first half of April.Together with this device, the OnePlus 8 Lite and OnePlus 8 models will debut.As you can find out in the published image, the OnePlus 8 Pro smartphone will be equipped with a screen with a small hole in the upper left corner: the front camera will be located here.The main rear camera will combine four optical modules, an additional element, and a dual-LED flash.These components will be arranged in two vertical rows.According to another source, the device is credited with having a Snapdragon 865 processor and a 6.7-inch screen with a resolution of 3140 × 1440 pixels.The amount of RAM supposedly will be 8/12 GB, the capacity of a UFS 3.0 flash drive is 128/256/512 GB.Power will be provided by a battery with a capacity of 4500 mAh. Meanwhile, OnePlus CEO Pete Lau said that all smartphones of the OnePlus 8 family will be able to function on fifth-generation mobile networks (5G).Novelties will debut during the second week of next month.This year, the situation with the OnePlus news will be very interesting, since, among other things, these smartphones will have to compete with the flagships of Xiaomi. Although, rather, Xiaomi's flagships will now have to compete with OnePlus devices,and given the significantly increased cost of the former, it will be interesting to see which smartphones turn out to be better and more popular.
As per the report published on winfuture the users will probably see the high end versions, i.e. the OnePlus 8 and OnePlus 8 Pro.The lite model, may face some delay to launch in the market. It will be avaialble after few months. The OnePlus 8 model was planed to launch in the March 2020 but due to corona outbreak there was delay in the development. In the China the product development was affected due to covid-19 virus spread. In the meantime, OnePlus is aiming for the launch of the new smartphones in mid-April, although it is still unclear when the devices will actually be available.