By Jitendra Indave in: Android News Realme On Friday, March 20, 2020 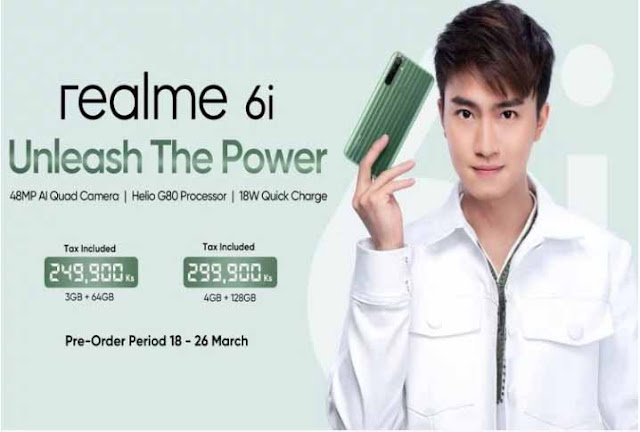 The Oppo sub brand Realme has launched its new smartphone Realme 6i at Myanmar. It is called the successor of Realme 5i version. About the specifications the device features a 6.5 inch HD plus display with 89.8% screen-to-body ratio and 20:9 aspect ratio. It is becoming the world's first smartphone to come powered by MediaTek helio G80 AI along with Mali G52 GPU. The handset packs with 3/4 Gigabyte of RAM and 64/128 Gigabyte of internal storage that can also be further expandable up to 250 GB MicroSD card slot.

In terms of camera Realme 6i support Quad camera setup on the rear which include a 48 megapixel main camera with 1.8 aperture + 8 megapixel Ultra Wide Angle lens 119 degree field of view + 2 megapixel micro lens and 2 megapixel depth sensor with f/2.4 aperture. On the front there is 16 megapixel selfie camera under the mini drop notch with f/2.0. As per the software device runs on Android 10 based on Realme UI out of the box. The phone comes equipped with a large 5000 mAh battery with 18 watt fast charging support.

Additionally smartphone also features rear- mounted fingerprint sensor for authentication. The connectivity options on the phone includes 4G VoLTE, Wi-Fi, Bluetooth 5.0 , GPS, 3.5 mm headphone jack, FM radio and a type C charging port. The physical dimensions of the smartphone measures at 164.4 x 75.4 x 9.0 mm and its weight around 195 grams. The Realme 6i has been priced in Myanmar for 3GB Ram + 64GB storage variant at KS 249900 (approx. INR 13000/US $180) and the higher variant with 4GB ram + 128GB storage option is priced at KS 299900(approx.. INR 15600/ US $2015). The smartphone is now available for pre-order in the country in milk white and green tea color options and it will go on sale starting from March 29. According to the Reality Myanmar Facebook page, it will be available for pre-order from 18 March to 26 March. At present, information has not been provided about its availability in other markets.