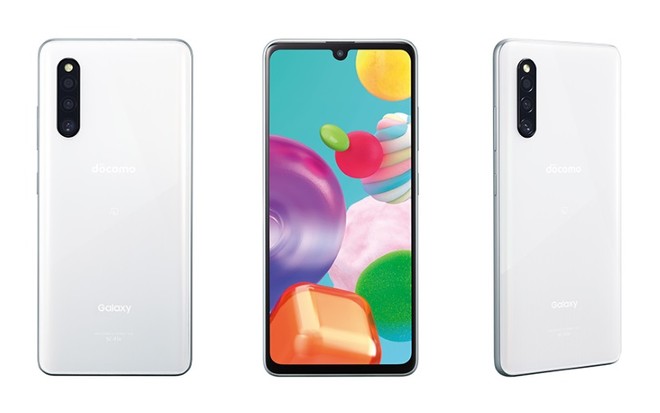 Recently the Samsung has added one feather in its crown of Galaxy series. It was silently unveiling successor of Galaxy A40 smartphone in Japan called Galaxy a 41.The Galaxy A40 was launched in the Netherland during the last year. It got a good response so far. The Samsung Galaxy A41 support the 6.1 inch Super AMOLED Infinity-U display with full HD+ resolution and 20:9 aspect ratio. Under the hood the phone is set to come forward with an unknown Octa Core processor made with a 4 Gigabyte of RAM and 64 bit of Internal storage.

Some are saying that it is expected to be powered by a MediaTek Helio P65 processor. As per the camera the Galaxy A41 features triple camera setup along with LED flash which includes a 48 megapixel main camera with F 2.0 aperture + 8 megapixel Ultra Wide Angle lens with f/2.2 aperture and 5 megapixel depth sensor with 2.4 apertures on the front there is a 25 megapixel selfie camera under the notch with f/2.2 aperture.

The handset equipped by a 3500 mAh battery that support 15 watt fast-charging additionally smartphone is also listed to support and in-display fingerprint sensor for authentication and it is certified by IP68 dust and water resistance. In terms of software the handset will likely completely loaded with Android 10 based on one UI 2.0 skin on top.

The availability details Galaxy 41 will be available for purchase in Japan from June 2020 in black, blue and white colour option.The pricing details period to announce by the company. When Samsung Galaxy A41 will be launched in India no detail found yet.